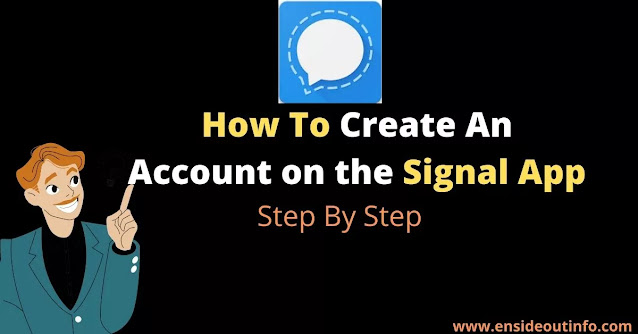 Hello everyone in this post, we are going to talk about Signal App like What is Signal App and how to create an account on the Signal App: Step By Step by using pictures and we will also talk about features of the Signal messaging application and so on.

In these days, the Signal Messaging App is being discussed with loud noises all over the world, the main reason behind is changing of WhatsApp’s privacy policy. Which is due to come into effect from January 2021 worldwide.

People have preferred to choose the signal Messaging App as a WhatsApp option, because this app is considered to be safer than other apps, including WhatsApp. Let’s know all the things you don’t know about the Signal Messaging App till today.

Best way to generate free high-quality Backlinks for a website


Signal App has got a green signal after the announcement of WhatsApp’s new policy. Signal App is suddenly used by so many people that its server has gone down. The signal itself has tweeted and said that the verification code is finding it difficult due to more users, though the team is working for it.

The Signal App app has topped the list of top free apps on Apple’s App Store. Signal App is seen as the biggest option for WhatsApp, though Telegram is also being named as an alternative to Whatsapp, but in the case of security and mission, Signal has left everyone behind.

What is Signal App?

In fact, its security measures are so good that experts also recommend it – because they know which apps are best for stopping unwanted intelligence.

Signal App are completely free to use, and it’s available for Android, iOS, and Chrome (a browser extension that links to your phone).

In addition to the additional security protocol, it includes all the basic messaging tools you’ll need. It also includes rid receipts, emoji support, chat groups, and voice and video calls.

Like WhatsApp, Signal uses your mobile number to identify you with your contacts, so there will no requirement for usernames or passwords.

Signal is also multimedia messaging app like WhatsApp that you can use in Windows, iOS, Mac and Android devices. The Signal app is owned by Signal Foundation and Signal Messenger LLC and is a non-profit company. The app has been developed by American cryptographer Moxie Marlinspike and is currently CEO of signal Messenger app.

Here we will discuss some important features of Signal App that you really need to know. There are few features of signal App are given below:-

2. By creating a group in the signal app, you cannot directly add anyone to it. Those you want to add will have the first notification, then only if you want to add them to the group.

4. Groups can also be formed but only 150 people can be added to the group.

5. Signal App does not give you a mission to store data on any other Cloud Storage.

6. In signal app, you can’t join the group without any permission.

7. Anyone who has to join the group will have a Notification whether to join it.

8. The best feature of Signal App is that it’s a very Secure application that lets your message sends, without saving data.

1. First you need to download signal App from Play store.

2. Open the Signal App after it’s installed on your mobile. You’ll have a Privacy-related Message show as you open it’s up to you.

3. Signal App will then ask you for Contact, Phone Calls Permission, to allow you.

You now have to register with your mobile number on Signal App. Like you do in Whatsapp and Telegram.

4. When you register on the Signal App, you’ll need to fill the Capcha Code for Human Verify that will belong to Google.

5. You will be sent an OTP containing 6 units of OTP and verify number.

6. You must now setup your Profile in Signal Application.

Enter your name and surname and click on Next.

7. The Signal App will ask you to create a Pin that it will have contained 4 digits.

You can now easily use the Signal App.

How Secure is Signal App?

In fact, the signal is much safer than WhatsApp because WhatsApp stores 16 kinds of information from users to use your app. The signal stores only the mobile number of users as the users ‘ signal account runs through it.

For these reasons, the signal app is much better than WhatsApp and if WhatsApp does not change the new privacy policy that you have created, users will definitely be able to boycott the WhatsApp app and adopt the signal app.